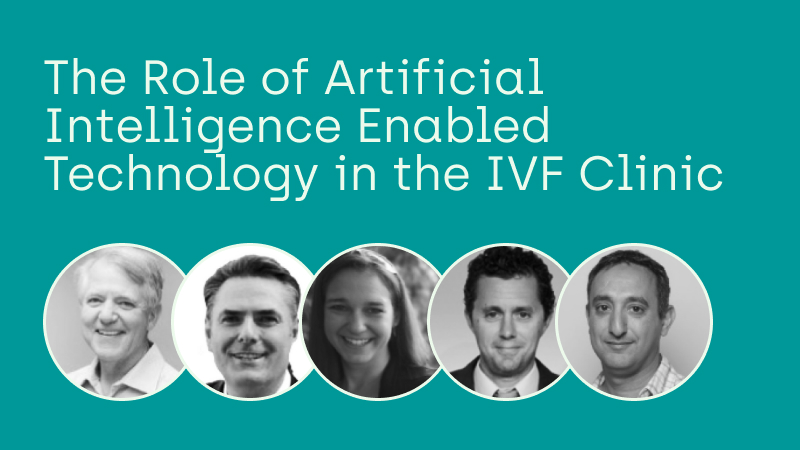 The Role of Artificial Intelligence Enabled Technology in the IVF Clinic

Fairtility is excited to announce the launch of AI Academy at ESHRE 2022 with Gerard Letterie, MD as the AIA academic head. Dr. Letterie notes that as technology improves and plays more a role in the clinical setting, there are three things elements we should be sensitive to: cost, outcome, and education. The AI Academy is dedicated to providing the education needed for embryologists and clinicians passionate about transparent AI in IVF.

More on the topic of AI in IVF, Nikica Zaninovic, PhD introduces a conference dedicated to exploring the role of AI in IVF: the AI Fertility conference in Dubrovnik, Croatia, which is happening September 15 – 18, 2022. With Cristina Hickman, PhD, Marcos Meseguer, PhD, and Assaf Ben-Meir, MD, the panel discusses opportunities and concerns of AI tools in an interactive discussion.

is a reproductive endocrinologist, partner at Seattle Reproductive Medicine, Seattle, Washington and co-founder of Quick Step Analytics LLC. He completed his training in obstetrics and gynecology at Walter Reed Hospital in Washington DC and a fellowship in REI at NIH. He has served on educational committees within his subspecialty and specialty of obstetrics and gynecology. He is a reviewer for journals including F/S, JARG and RBMO among others. He is the author of publications on the topics of clinical care, medical liability and artificial intelligence in peer-reviewed journals including abstracts, reviews, several editorials and Op Ed’s.

is Embryology Laboratory Director and Associate Professor of Embryology in Obstetrics and Gynecology at the Ronald O. Perelman and Claudia Cohen Center for Reproductive Medicine of Weill Cornell Medical College in New York, US.

Dr. Zaninovic received his Master’s and Ph.D. in Biology from the University of Zagreb, Croatia. He is double-certified as a High-complexity Laboratory Director (HELD) and Embryology Laboratory Director (E.L.D.) by the American Association of Bioanalysts. In 1990, he was responsible for South America’s first successful intracytoplasmic sperm injection (ICSI) and preimplantation genetic diagnosis (PGT) pregnancies. He joined Weill Cornell Medical College’s Embryology Laboratory in 1995 as the supervisor and was appointed the lab’s Director in 2010. His research interests include clinical and experimental embryology, stem cell biology, and the implementation of AI technology in ART.

He is the founder and the president of the ASRM SIG group, AI in IVF. He is one of the organizers of the AIFertility Conference in Dubrovnik, Croatia.

is the Vice President of Clinical Affairs of Fairtility, one of the speakers at Fairtility’s AI Academy; and a co-founder of AIFertility.org, the first international conference combining AI and Fertility. Her teams’ work on Artificial Intelligence in IVF over the last 6 years has led to her nomination by ‘Computer Weekly’ in the list of the ‘Most influential women in tech in the UK’.

Cristina is also the Chief Scientific Officer of Apricity, the first virtual fertility clinic, a lecturer at Imperial College London and a Co-founder and Co-owner of Aria Fertility, a full-service IVF fertility clinic in central London: Cristina built and operated the practice while developing a pioneering fully digitised clinical process and patient experience. Cristina has 20 years reproductive technology experience as a researcher and embryologist, and 11 years as a Lab Director in the UK as well as clinics in the Caribbean and Saudi Arabia. As Founder of IVF Professionals Limited, an ART consulting service, Cristina offered a variety of advisory services to a wide range of corporate and clinical clients, developing a holistic industry perspective through consultations with more than 250 clinics in more than 20 countries worldwide; building 11 IVF labs; consulting with several start-up and established fertility companies. She was the Scientific representative of the British Fertility Society and is an active researcher with numerous published contributions to book chapters and leading scientific journals, such as Nature, Fertility & Sterility, Human Reproduction.

was born in November 1974, received his Biological Sciences Degree in 1997 from the University of Valencia in Spain. He performed a pre‐doctoral fellowship in St Mary´s Hospital, Manchester University, United Kingdom. He received his Ph.D. Degree in Obstetrics and Gynecoloy in 2002 from the University of Valencia, Spain, and the European Doctor Degree form the same university. He has also a master degree in Research Methods; Design and Statistics from Universidad Autónoma de Barcelona, Spain. Actually is Scientific Manager in Equipo IVI and Senior Embriologist in the IVF unit of IVI Valencia. He was Co‐Director of the Andrology Laboratory at the Instituto Valenciano de Infertilidad (IVI) from 2000 to 2004 Dr. Meseguer is in the Editorial Board of Fertility and Sterility and RBM Online journals and has received the prize paper of the Society of Reproduction and Infertility (American Society of Reproductive Medicine). Three times the Lalor Foundation International Award from the American Society of Andrology and four times the reasearch award from the Spanish Society of Fertility. The primary areas of his research are embryology and male infertility. As Principal Investigator, his work has been funded through 15 projects sponsored by the Spanish Government, including three EUREKA projects (granted to high quality technological projects) supported by the European Community. He has published over 130 articles and 50 reviews or book chapters, editor of the first Time‐lapse Atlas Book, made more than 400 presentations at national and international congresses. He has been the Director of 12 Doctoral Thesis all qualified with “Cum Laude”, and actually is directing 7 doctoral thesis. He is also Statistics Advisor of Equipo IVI the biggest group of infertility clinics in Spain and one of the most important in Europe, and Associate Professor of the Master in Biotechnology from Valencia University.

is the Director of IVF unit in Hadassah Medical Organization and Faculty of Medicine, Hebrew University of Jerusalem, Israel. He received his MD in 1998 from The Hebrew University in Jerusalem and completed his residency in Obstetrics and Gynecology at Hadassah Medical Center. In 2013 he accomplished a fellowship in Reproductive Endocrinology and Infertility at the University of Toronto. His research is at the field of reproductive aging and evaluation of embryo implantation potential. During the last years he was focused on artificial intelligence-based algorithms analyzing morphology and videos movies of embryo development from time-lapse incubators to predict embryo quality. In 2020 he co-founded Fairtility, a startup company developing artificial intelligence tools for IVF treatments and is its Chief Medical Officer.